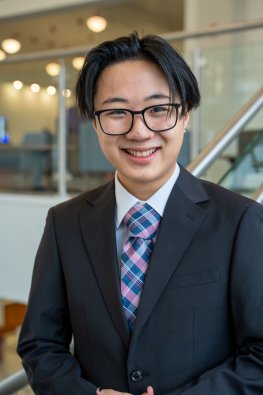 Richard Liu is a student at Montclair State University, working on a Bachelor’s degree in Psychology with a focus on pre-law studies. Once he graduates, Richard strives to be accepted into UC Berkeley Law, where he will pursue a Juris Doctorate with a focus on Political Science. He hopes his education will help prepare him to one day become a congressional representative. The intersectionality of Richard’s experience as a foster youth and an Asian American, as well as his passion for the environment and animal welfare, drives his ambition to become a representative so that he can help to leave the world a better place.

As a member of the New Jersey DCF Youth Council, Richard is honing the listening skills that will make him a more effective representative, while also utilizing his own experiences and insight to advocate on behalf of foster youth in the state. In this role he makes beneficial contributions to discussions, helps to identify problems that young people in foster care face, and gives a voice to a minority community. Richard is also a member of the National Foster Youth Institute. He volunteers as a mentor for prospective university students, advising them as they prepare for the transition from high school to college.

Richard spent about three years in foster care. The experience forced him to grow up quickly, and to develop his emotional maturity and resilience. He realized that the work of social services is, paradoxically, to rid the world of the need for social services. This perspective led Richard to develop an insatiable desire to use his experiences to fight for a better world.