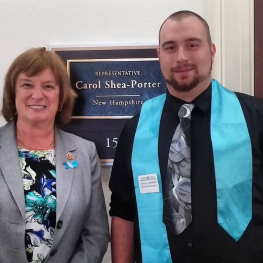 Josh Johnston spent 6 years in New Hampshire's foster care system. Josh experienced a number of different types of placements during his time in foster care, including shelters, residential programs and an independent living program. He currently works for the independent living program that he previously attended. Josh actively participates in the New Hampshire State Youth Advisory Board where he assists in organizing and facilitating the annual Youth Conference, including coordinating with Congressional offices to connect with the advisory board and youth attending the conference. He participated in the 2014 Congressional Foster Youth Shadow Day and co-facilitated with FosterClub at the 2014 New Hampshire Conference. Josh has also worked with Easter Seals New Hampshire as a Youth Advocate and as a Youth Consultant, sharing his experiences and knowledge to impact future policies. He currently pursues his Bachelor’s Degree in Video Game Art and Design at the Institute of Art and hopes to work for a successful gaming company working on creating new characters and environments for games. Josh believes youth involvement in system change is vital. In his own words, “Times change, and the system should be changing with it, so youth who are still involved in care or have recently left need to be giving those in charge feedback so the system can adapt to what youth need today.”