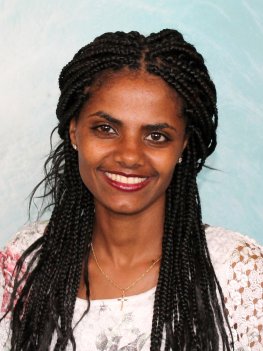 Yeshi Vaughan is a 22-year-old from Washington. Her story into foster care begins in Addis Ababa, Ethiopia. She was 14 years old and had been living in an orphanage for about three years when she was adopted by a family from the United States. They brought her to Washington where she began a new life, in a new culture, with a family of strangers. Unfortunately, life with this family was difficult and did not work out as she had hoped. As a freshman in highschool, she ended up in a youth shelter called Haven House. She was there for two weeks when her social worker told her about a foster mom who would be a great fit for her. This was the beginning of a new life for her. She did not have a choice of where to go, but she took a chance and met a beautiful woman who would become her foster mom. Her new life was a great fit in a wonderful environment; she never had to move homes again.

Yeshi graduated in the top ten of her high school class, and is now majoring in social work at St. Martins University and plans to graduate in 2019. She has been on the dean’s list every semester in college. She hopes that as a social worker she can share her story to encourage other youth. Yeshi believes having a permanent house is important because without a family, her life would be very different. Yeshi also advocates for foster families to receive more training about youth from different cultures. In her free time, Yeshi enjoys running. At her college she participates in both cross country and track and field.