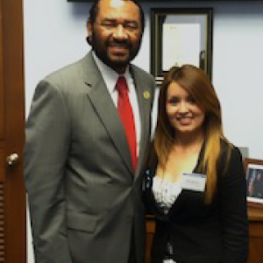 Silvia Yamileth Garcia Murcia spent over 3 years in Virginia's foster care system. Silvia Yamileth Garcia Murcia has overcome obstacles which could fill a book - which she will write herself someday. Right now she's enrolled at the John Tyler Community College pursuing a nursing degree. Her final goal is medical school and a career as a physician. But Silvia has a larger identity at the college. Her professors notice that she has a special drive to get her where she wants to go. She purposely inspires everyone around her to be the best that they can be. In a short time, she has built a circle of friends who are growing into great students and future professionals, in part, because of her example and enthusiasm. She is a real asset in every environment. She has also shown leadership as she represents John Tyler Community College at the student advisory committee (SCHEV), as she fills her duties as vice president of the student council, as president of the Chemistry and Latin American culture club, and as a participant of the foster care youth shadow day. She received Honor Roll Award from her High School, which is given to students who have maintained a 3.5 or higher GPA all the way through school. In 2012, Silvia received the Jane Jiggetts Baskerville Award for English Speakers of Other Languages (ESOL). This recognition is given to a student each year who has demonstrated excellence in English and extraordinary support to other students toward achieving academic success. It's very clear that Silvia will always aim high and will enjoy an inspiring future.