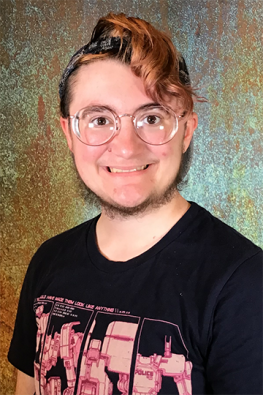 Patrick entered care at 17 after escaping his abusive family and has opted into extended care. Since then, Patrick has experienced a foster home, SILP (a supervised independent living placement), homelessness, and is living in his first apartment while preparing to age out into supportive housing.

Patrick is a bisexual, queer nonbinary trans man who has faced challenges for being his authentic self in care. He started testosterone in early 2018, and proudly shares his LGBT+ status hoping to provide the “visibly out” role model he wishes he had as a queer youth in care.

Patrick advocates for LGBTQ youth, homeless youth, and other marginalized youth. They have spoken three times at the Capitol for the Homeless Youth Act of 2018. They have also taken part in activism rallies and marches for the local trans community and in various Black Lives Matter actions and marches in Sacramento.

They have ADHD, bipolar, anxiety, PTSD, and are autistic. Patrick fights to de-stigmatize mental illness and disabilities among vulnerable populations based on his own lived experience in these communities. They are a vocal anti-capitalist and human rights activist who advocates for various causes locally and on social media.

Besides being an avid reader, writer, and artist, Patrick attends Sacramento City College where he studies journalism. He hopes to get a job where he can use his communicative skills to uplift and support minority and marginalized voices.

Patrick Gabbett is passionate, brave, and willing to be a voice for the voiceless—but he hopes to create a world where the voiceless themselves.