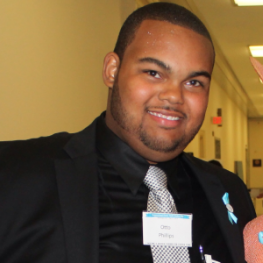 Otto Phillips spent 13 years in Florida's foster care system. Otto came into care at age five when the state took him and his 3 sisters from his mom and abusive boyfriend. They were placed with their grandmother for 10 years until she passed away. “It was the worst time in my life pretty much. My grandmother was basically my mom and she was not there anymore.” Otto and his sisters were separated with Otto having 3 different placements in the first 6 moths before winding up in a group home. Otto says his experiences have already helped him advocate to make the system better. He has helped to get two laws passed; extending foster care to 21 and allowing foster parents to use their parental judgment. "Like taking them on vacation and letting kids sleep over at their friends house. Before you had to get court permission and do a background check. We talked about what it meant to be a kid." "When I was 18 I had to put all my things in a garbage bag and it was worst feeling in the world. Now I know other youth won’t have to go through that." He feels that his experience helped make him a better advocate because he understands what youth in care are going through. He believes that youths can use their experiences to "help make things better". I work and I may be getting a job at a group home. I lived in a group home and I know what they go through and how tough it is. It’s important for youth to see people who have been through the same thing.