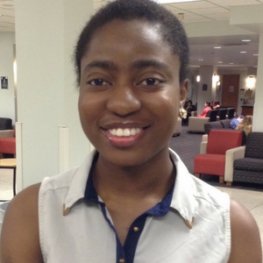 Oluwatobi spent 1 years in Minnesota's foster care system. Born in Nigeria, Oluwatobi Oluwagbemi spent one year in foster care before she was adopted. Even though her past was filled with pain, trauma and bullying, she chooses to focus on the future by setting goals. Oluwatobi does not let the tough times break her or define her she learns from them and chooses to grow to be a better person. Oluwatobi knows the value of gaining independent living skills and wants foster youth to believe in and focus on their strengths. Currently enrolled at St. Cloud State University, Oluwatobi has received numerous awards for involvement like being the most involved student and being a community builder. Oluwatobi is involved with many organizations that focus on leadership and women’s rights such as Public Leadership Education Network (PLEN), American Association of University Women, The League of Women Voters and Vote, Run and Lead. She has interned with African Women’s Alliance and The Minnesota Democratic–Farmer–Labor Party (DFL), as well as had involvement with several organizations in St. Cloud State University. Oluwatobi writes for the school newspaper, University Chronicle and is the founder of the Honor Society. From a country that suppresses opportunities for women, Oluwatobi is passionate about women’s rights because she knows firsthand the value of education and the opportunities it can give. With role models like Malala and Michelle Obama, Oluwatobi’s future goals are to make a positive difference in the world by helping families that have been through trauma and providing educational opportunities to girls. She is also focused on writing a book, becoming a motivational speaker and working on every continent for several Governments. With a strong belief in herself, Oluwatobi is unstoppable. Oluwatobi wants others who have been through any sort of hardship to never give up because the end is always more beautiful than the beginning.