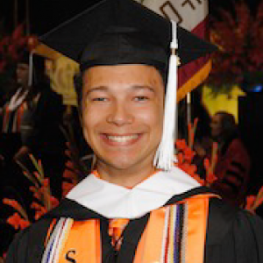 Michael Williamson spent 11 years in California's foster care system. Michael Graduated with a teaching credential in May 2013 and obtained an elementary teaching position in August 2013. He currently works at Clovis Unified School District and his career goal is to become a principal and eventually hold a district leadership position. Michael was in foster care starting in 3rd grade at the age of 7 and left foster care upon graduation from high school in 2009. Michael was fortunate enough to be in one home during his time in foster care. Michael is the kind of leader whose ability to mentor others comes naturally. While in college, Michael has held several leadership and volunteer roles. He was a member of the School of Education Student Association, helping students in the School of Education and children in the Stockton, California area. Through this program, he participated in a weekly event called Book Buddies reading books and mentoring young children in the area. He was also a member of Kappa Delta Epsilon, which is an educational fraternity on campus that did volunteer work at various schools. Michael was the vice-president of this fraternity for two years. He was the Constitution and By-laws Chair and Public Relations Chair for the Association of Supervision and Curriculum Development on Campus for four years, traveling to four international conferences. Michael was a Student Advisor and helped mentor all incoming students for their first two years and served as an interviewer for new Student Advisors. He was on the planning committee for the Student Advising class and was one of the lead teachers. He was selected to be a Resident Assistant his junior and senior years supervising the largest building on campus with over 300 residents. He was also a member of the Alpha Lambda Delta Honors Fraternity. Michael was a founding member of the National Society of Success and Leadership on his campus. While in high school and part of the foster care system, Michael spoke at various events. He was the keynote speaker for three years at the Fresno County Office of Education Freshmen Educational Workshop presenting on various ways children in the foster care system could still be successful in high school. During his junior year, he also traveled to Sacramento with the Fresno Country Office of Education and spoke at the Family-to-Family Pacific Region Convening Conference hosted by the Annie E. Casey Foundation. In high school, Michael was a member of the Invisible Children Club, student government, school leadership, the swim team, a Kids Day volunteer, worked at the Poverala House (homeless shelter), Make-a-Wish Foundation, and was a student member of the Clovis Unified School District’s Board of Directors his senior year. He also earned multiple awards and distinctions.