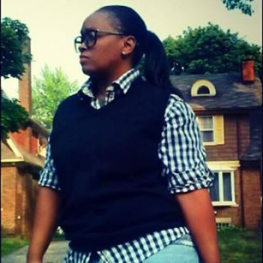 Marie Fleming spent 7 years in Michigan's foster care system. After entering into the foster care system at age 15, Marie was placed into a facility for six months until she was finally released into the custody of her grandmother. During her transition from foster care, Marie continued to struggle with issues of past abuse and abandonment. Without proper support her attempts to achieve independence and higher education became increasingly more difficult and she on more than one occasion found herself homeless. Despite the challenges she faced while trying to achieve independence, she eventually found a voice through advocacy and began enrollment in the Blue Babies of Michigan mentoring program. Realizing that her story could make a difference for other people was a major turning point for Marie and she soon began embodying the success she strived to help others achieve. Since discovering the potential that her story had for helping other people, Marie has worked with countless venders and organizations from around the state to raise awareness about the challenges faced by youth in foster care. Marie is currently enrolled in school with the intention to become a social worker and plays an active part on Michigan’s Youth Opportunities Initiative board.