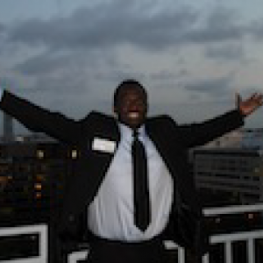 Kashawn Omar McRavion-Little spent 9 years in North Carolina's foster care system. Kashawn entered care at age 5 after being removed from his home. After a year of living with foster families, he was moved to a group home where he remained for nearly 7 years until he was adopted by the former house parents of his group home. After graduating with his bachelor’s degree in social work Summa Cum Laude from North Carolina A &amp; T State University in 2014, he started a group home business for adults with Developmental Disabilities with his brother. During his time at A&amp;T, he was the president of his university’s honors program, where he committed his time to raise money for future honors scholars who were struggling to pay for school. He was honored by Foster Club as a 2013 Outstanding Young Leader for his work to improve foster care. Recently, Kashawn relocated to Massachusetts to become a licensed social worker to continue his commitment to improving child welfare policies within.