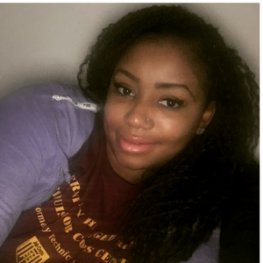 Juliona Wease spent 7 years in Missouri's foster care system. Juliona first entered care when she was 13; before entering care, she would have to worry about things a normal 13 year-old shouldn't have to worry about like food and shelter. After graduating from Saint Louis Job Corps, she attended Florissant Valley Community College when she at age 17. During the first semester, she found out she was expecting. Being pregnant at a young age did not stop her. Juliona has persevered; she now has a career, car and her own apartment. Currently, she is mentor at Saint Louis Job Corps, volunteers at Suz's Spot for Tots daycare, has attended Leadership Conferences in Jefferson City and the Leadership Camp with Chaffee. Juliona wants go to school to earn her Bachelor's of Science in Nursing and would like to open a place for teens and young mothers to go when they don't have any place to go. Her dream is to pay for her son to attend college. Juliona has started a career at a hospital and credits her support network including her case worker, GAL, CASA and others. Quote: I give back because life gets hard sometimes and everybody needs help.