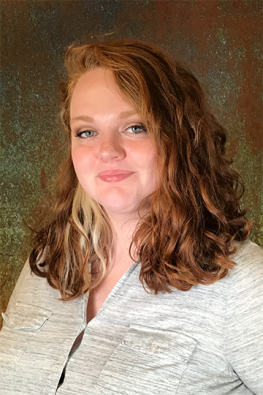 Jasper Gain
Age: 23
Pronouns: She/her/hers
Jasper Is attending school at Missouri State University. She plans on graduating in
2021 with a Bachelor of Science in International History and a Bachelor of Science in
Communication Sciences and Disorders. Her emphasis is Education of the Deaf and Hard of
Hearing, so she Minors in Sign Language Studies. When she finishes her undergrad program,
she would like to pursue graduate school, and eventually a doctoral program. Her biggest goal
is to be a history professor at a deaf university.

Jasper has a passion for education and traveling, so she tries to study away when she can find
scholarships to support it. So far, she has studied special education in Nicaragua, cultural
diversity in education in South Africa, and political history in Israel. She also spends a lot of her
time volunteering with organizations such as , Ozarks Food Harvest, Cornerstones of
Care, the Dickerson Park Zoo, and as a tutor at a local school. She runs an international true
crime podcast is up and coming.

Jasper went into foster care at 15. At the time there was not an available foster home, so
Jasper had to stay at a teen homeless shelter. She dropped out of high school during this time.
From there she went into a group home where she stayed for a short amount of time before
convincing a neighbor to sign up to be a foster parent. Her foster mom helped her enroll back
into where she made up all of her credits in one semester. After getting back on track,
her foster mother’s mental health began to decline, and she could no longer stay in the home.
She reached out to her biological mother’s ex-husband to ask him to become her foster father.
He was hesitant, but after some convincing from Jasper and her case worker he changed his
mind. It granted him guardianship when Jasper was 17.

Jasper dropped out of high school a second time during her junior year. She joined Missouri
Options which is a program that allows students to study for the GED test. When they take it
and pass they can get a high school diploma. She the program to take a year, but
completed it in several weeks. This caused her to graduate high school a year early. She went to
a nearby community college during what would have been her senior year.
After being in college a couple years, Jasper had to put a break in her education when she was
diagnosed with stage 4 Ovarian Cancer. She moved back home from college to go through
chemotherapy. After five months of treatment she cancer free!
Shortly after her biological father passed away, leaving behind her younger sister. Jasper
stepped up to take guardianship of her sister and moved back to her college town in order to
continue pursuing her degree.