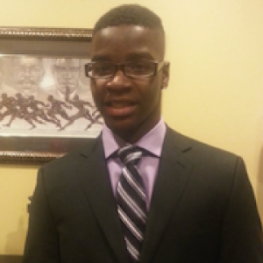 Isaiah Roberts spent 10 years in North Carolina's foster care system Isaiah has received principle honors award for straight A's in his freshmen year of high school. He also received the African American Academic Excellence award in his junior year of high school. Isaiah feels that “It is vital that youth, and young adults have the opportunity to speak out about the substitute care system because we are the ones experiencing the substitute care system first hand.” Young people know what is best for their own futures. Isaiah is on the SAYSO Board of Directors (Strong Able Youth Speaking Out, a statewide association of youth aged 14 to 24 who are or have been in the out-of-home care system based in North Carolina). He also volunteers every year as a Junior Counselor for Camp Lurcrest. He currently has accumulated 40 hours of volunteer court internship time. Since the age of four, Isaiah has been in the foster care system. He initially entered foster care due to abuse, and was returned to his parents care several times within 9 years. In 2008 he was finally placed back into the home of his parents- but was again removed from their custody in 2010 due to child abuse that occurred when they found issue with his sexual orientation. At that point he remained in the foster system, residing in over 20 different foster homes in his lifetime.