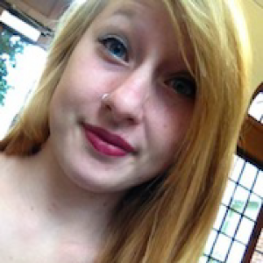 Hana Kent spent 13 years in Oregon's foster care system. At just seventeen years of age—thirteen of which have been in foster care—Hana Kent has already committed herself to taking an active role in note only her own education, but in the education and betterment of those around her. Though her life has placed numerous obstacles in her path, Hana’s maturity and dedication to those around her have already made her a force in her Portland community. Her internships and volunteer jobs would be considered numerous for someone of any age and experience. The list of organizations that have been the recipients of Hana’s time and effort is impressive indeed: Portland State University’s My Life program, in which she has learned to advocate for the rights of foster youth; the Roosevelt High School Youth Advisory Commission, a volunteer program that does everything from working at an animal shelter to picking up trash to helping senior citizens with their gardening; Bridges, in which high-schoolers speak at middle schools, helping younger kids get ready for that next step; and a Portland Public Schools program designed to help teens get involved and engaged in their own healthcare. Despite all of her community involvement, Hana has found time to be a key player on Roosevelt’s soccer team, earning the Most Improved Player award in 2012. And this despite the hardship of losing a permanent living situation due to the terminal illness of a foster parent. Not surprisingly, the adults in her life call her “responsible,” “resilient,” “determined” and “just awesome.” Hana Kent is already well on her way to a life of leadership and accomplishment.