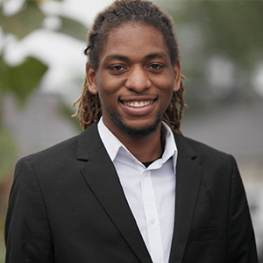 “George is, by far, the most incredible young man I have ever met. He is honest and patient. He loves with his whole heart.” This is the personal observation of George’s nominator. During his sophomore year he moved three times, and his grades suffered due to the instability. After being placed in a more stable home, George was able to pull his grades back up and now is set to graduate in 2010. He then plans to attend the New York Film Academy. Why film? “George is a film maker. He has directed several films for the Peace4Kids Peapod Music and Arts Academy and the Peace4Kids Teen Program. Just recently George shot and directed a video for Apl.De.Ap from the Black Eyed Peas.” George has also been involved with Peace4Kids by serving on their Emancipation Youth Advisory Council. Through this council he has been involved in many projects, his most recent being Project Home Bound. He is dedicating much of his time to making sure transitioning youth have a place to call home and he has created a website (www.projecthomebound.com) to communicate his views and the struggle for transitioning youth.

thanks for the inspiration :)