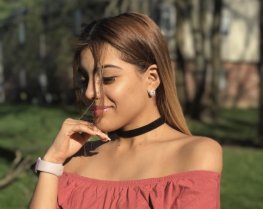 Estrellita Spears was placed in foster care at the age of twelve. At the time, she barely spoke any English and didn’t know too much about the culture. She was adopted along with three younger siblings at the age of sixteen. She started college but found that she could not afford to keep going. She found a way to pay by joining the army. Estrellita has been giving back to the community by tutoring others, being involved in fundraisers and even undertaking an internship with Teen Court and plans on finishing school with a business and political science degree.