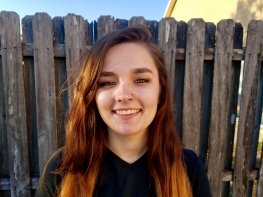 Courtney Sausville spent 4 years in Vermont's foster care system. Courtney was in foster care in Southern Vermont from the age of 12 until she was adopted at 16. Determined to become someone, she finished high school a year early and went off to college for a new start to life. Courtney studied at the College of St. Joseph where she received her Associates Degree in Liberal Studies. Throughout high school and college, Courtney participated as a member of Vermont’s Youth Development Program. In 2015, she was recognized as an Outstanding Youth Leader for FosterClub. During college, she joined the STEPs program, which was young people who were transitioning from foster care to college. Courtney has also served as a mentor for the DREAM program - where she connected with underprivileged kids giving them a taste of life outside of what they normally get to experience. Currently, she is an advocate for Only Human. Only Human’s mission is to provide a platform to help humans all over the world, share their story, come together in solidarity and do good for others. Courtney’s hobbies include writing,drawing, and photography all the way to binge-watching Netflix. Recognizing that goals may change, she wants to be a forensic pathologist but that’s in the future. Courtney’s current goal is to finish writing her book and have it published.