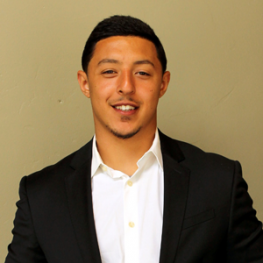 Cody spent 12 years in New York City's foster care system Observe, Understand, and Adapt. That is how 21-year- old Cody Rivera explains his twelve years in the New York State Foster Care System. Observing, understanding, and adapting: to different people and their cultural backgrounds, and their different styles of living, is how he succeeded in achieving his goal of becoming the first generation in his family to go to College. Cody Rivera began his ascent to success through athletics and academics in high school, which received him a spot in the Arthur O Eve Higher Education Opportunity Program (HEOP), an Academic Opportunity Program for financially limited New York State residents. Currently, Cody is pursuing a Bachelor Degree of Arts at Hobart and William Smith Colleges and is Majoring in Architecture and Minoring in Anthropology. Cody will graduate this May (Spring of 2017) and will be applying to a Master’s Degree Program in Business. After Business School, Cody plans to enter the Industrial Hemp market and start a business in producing industrial hemp. Cody recognizes that his 12 years in the NYS foster care system has influenced his character, values, and academic success. In recognizing that, he hopes to use his future business background and hemp business as a medium to influence foster kids around the Country to learn about business, innovation, and agriculture. In all, Cody is innovative, an entrepreneur, and a young leader who hopes to pay his knowledge, experience, and passion forward so that foster children around the country are given an opportunity to become successful young leaders and innovators, for themselves and other foster children. Cody is innovative, an entrepreneur, and a young leader paying it forward.