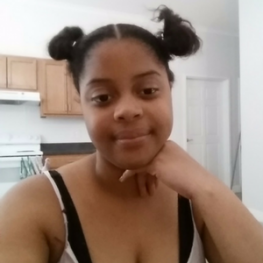 Arianna spent 3 years in Georgia's foster care system. Arianna entered care in the beginning of 2014 and experienced four different placements including group homes since then. Currently, she participates in the independent living program where she feels more freedom. Despite attending nine different high schools, Arianna is on track to graduate. She is involved in MAAC (Multi-Agency Alliance for Children) and EmpowerMEnt - a group of current and former foster youth working with community leaders to change the foster care system. Arianna also volunteers, providing advice about bullying to kids in her church. She donates to the homeless shelter, serves as the Head Roll Chairman in FCCLA, and has spoken at a foster parent meeting. Previously, Arianna sang with her church choir. She wants to attend Albany State next fall where she plans to double major in Psychology and Sociology. Long-term, she wants to provide support to siblings who aren't in foster care - recognizing that they also experience similar trauma to their siblings who are in foster care. Arianna wants to work with teenagers in foster care encouraging them to focus on school because it is a key to success.