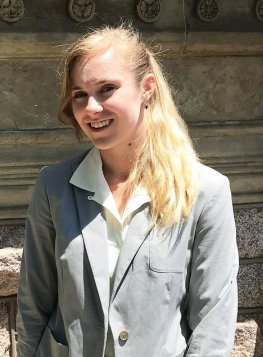 When Anna was a young child her mom said, “Nobody ever said life was fair.” It was stated plainly,
absolutely, and devoid of any emotion— unfairness was an unalterable fact of life. During her life, she
had heard many variations of this saying, and they all boiled down to the same pessimistic and eternally
perpetuated idea: Life isn’t fair.

While Anna was growing up, she witnessed and experienced countless things she knew were not fair. It
was not fair that she was adopted into a home where drugs, mental illness, and child abuse were
normalized. It was not fair that her safety as a child was not valued or protected. It was not right that
she would spend her childhood in the foster care system with many of her needs unmet.
A driving question that Anna sometimes thought about was, “Were these injustices the result of the
failure of law, or policy?” Ultimately, she concluded it was impossible to analyze or remedy one or the
other. Fighting for a better world where injustice is reduced will require a concerted effort in both law
and policy.

Anna’s most important academic, personal and professional goal is to enroll in a joint M.P.P. and J.D.
program so she can continue to learn about the similarities and differences of laws and policies.
Receiving both of these degrees is essential so she can most fully translate and apply her passion for
justice into action. Being near the completion of her B.A. in Legal Studies and minors in Public Policy and
Human Rights at UC Berkeley, Anna feels she will not be able to fully apply her knowledge or skill set by
achieving only one degree. Anna’s time in foster care, academia, and public service have revealed to her
that laws often mean little without overlapping public policy protections, and vice versa. She plans to
achieve advanced degrees in public policy and law because she possesses exceptional knowledge, lived
experiences, and skills in both areas.