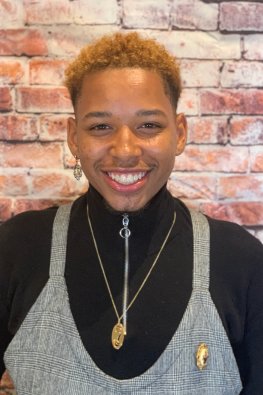 Ameris is a queer Black organizer who experienced 5 years of care in Pennsylvania. While in care, she experienced one foster home placement where her parents were two White lesbian women. Previously, Ameris attended Pittsburgh Creative for Performing Arts School, where she graduated during the summer of 2018.

As a young Black queer child at a time with high racial tension, her parents actively educated themselves on the issues and encouraged Ameris to be unapologetically themself. Growing up in a LGBTQ+ and multiracial household, Ameris became a strong intersectional activist at a young age.

In 2017, they co-led a march of 300 students from multiple school districts in protesting DeVos as Secretary of Education. Previously, she sat on the executive board for a black student union, a Youth Advisory Board for the Carnegie Museum of Art, and a board for sisTers PGH, a nonprofit that supports homeless black trans-women.

In their spare time, they enjoy going to art shows, dancing with friends, voguing in her bedroom, and acting.

Ameris Carter is an artist at heart and a vessel for greatness. They will continue to capture stories of their community, teach young people to see themselves in their education, and will always remain an advocate for black and brown youth.