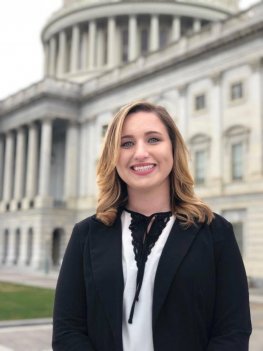 Alexis Lenderman entered the Michigan foster care system and her 9th school in the 7th grade. While in care, she testified in court against her father, learned that her mother passed away by suicide, and another loved one became ill and passed. She is a Nsoro and Seita Scholar at Western Michigan University, participated in a community and faith forum to bring awareness to issues surrounding care, was chosen to be Western Michigan University’s 2017 Newman Civic Fellow, as well as participated in a Leadership and the American Presidency program in Washington D.C. sponsored by the Ronald Reagan Foundation & Institute while attending George Mason University and interning at the Congressional Coalition on Adoption. Through all of this, she has become stronger and gives back as much as possible. Alexis has recently been approved by the Children’s Bureau to serve as a National Youth in Transition Database Reviewer to ensure that youth are obtaining adequate resources when transitioning out of care. Also, Alexis will be participating in the International Relations Career Challenge in D.C. this summer after she returns from her study abroad in Quito, Ecuador, sponsored by the prestigious Gilman Scholarship. Despite her challenges, Alexis will graduate with two bachelor’s degrees, a BA and a BBA, a certification in Nonprofit Leadership and a minor in political science. She plans to pursue graduate school after WMU in international affairs to use her skills and talents to make a global impact.