Kristopher entered the Texas foster care system at the age of 10. He was removed from his family of origin after his 5th grade teacher noticed significant bruising on his torso and face. Separated from his two siblings, Kristopher would go on to live in over 20 different placements and attend roughly the same number of schools until aging out of the system at the age of 18.

Kristopher found out he was “different” from other boys his age after being disciplined for writing a love note to another boy in his 3rd grade class. After entering foster care, he would be reminded everyday of the tax he would pay for that difference. As a gay foster child, Kristopher was forced to grow up in congregate care placements such as group homes and residential treatment centers (RTCs) often times moving every 5 or 6 months. He was told that foster families “didn’t want a gay kid in their home.”

At the age of 14, Kristopher was placed at a residential treatment center in Denton, TX where he lived for almost a year and a half. While there, he was routinely molested by one of his caregivers. Unfortunately, due to the restrictive nature of the facility he had been placed in, Kristopher was never afforded the opportunity to report the abuse—though having lived in a number of RTCs up until that point, he almost thought that what he was experiencing was normal.

By the time he was 16, Kristopher had been abused sexually, physically and emotionally, numerous times. At the age of 18 and after spending 8 years in foster care, Kristopher aged out of the system. He did so without the tools, skills, knowledge, or experiences necessary to transition to self-sufficiency successfully. Consequently, he spent the next 6 months homeless—living on the streets of Houston—surviving through the street economy.

Kristopher would eventually find out he was HIV-positive—undoubtedly a repercussion from his involvement in sex work while on the streets. 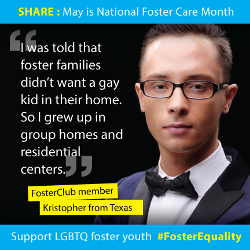 The challenges that the foster care system imposed on Kristopher were more than unfair, they were cruel. As a child who entered into the protective custody of the state, he received none of the nurturing or normalcy that should be afforded to our nations most vulnerable youth. Although Kristopher was able to bounce back from many of the tribulations he encountered as a result of his time in care, there are some experiences and trauma that can’t be erased with success. As an advocate, Kristopher has taken his past and made it into a powerful tool for changing the future outcomes for countless other youth like himself.

Kristopher Sharp uses his past experiences to help advocate for policy changes he hopes will help future generations of foster children more adequately prepare for adult life. In 2013, he represented FosterClub as a young leader during the 2013 Congressional Foster Youth Shadow Experience. Previously, Kristopher served as a congressional fellow for the Gay and Lesbian Victory Fund and Institute in the office of Senator Patty Murray (D-WA). He was formerly the Student Body Vice President of the University of Houston-Downtown, and most recently worked as an aid to Texas Senator Wendy Davis. Kristopher was the recipient of the 2014 National Gay and Lesbian Taskforce’s Paul A. Anderson Youth Leadership Award, he was a part of the inaugural True Colors Fund’s “40 of the Forty,” and was the recipient of the 2013 Human Rights Campaign Young Leader for Equality Award. He will graduate in May from University of Houston-Downtown with a bachelors degree in social work.

If you are inspired by Kristopher's story, we invite you to share it through social media, email, blogs, newsletters, articles and word of mouth. If you would like to contact Kristopher for media purposes, please call Jessica Gibson at (503) 717-1552.