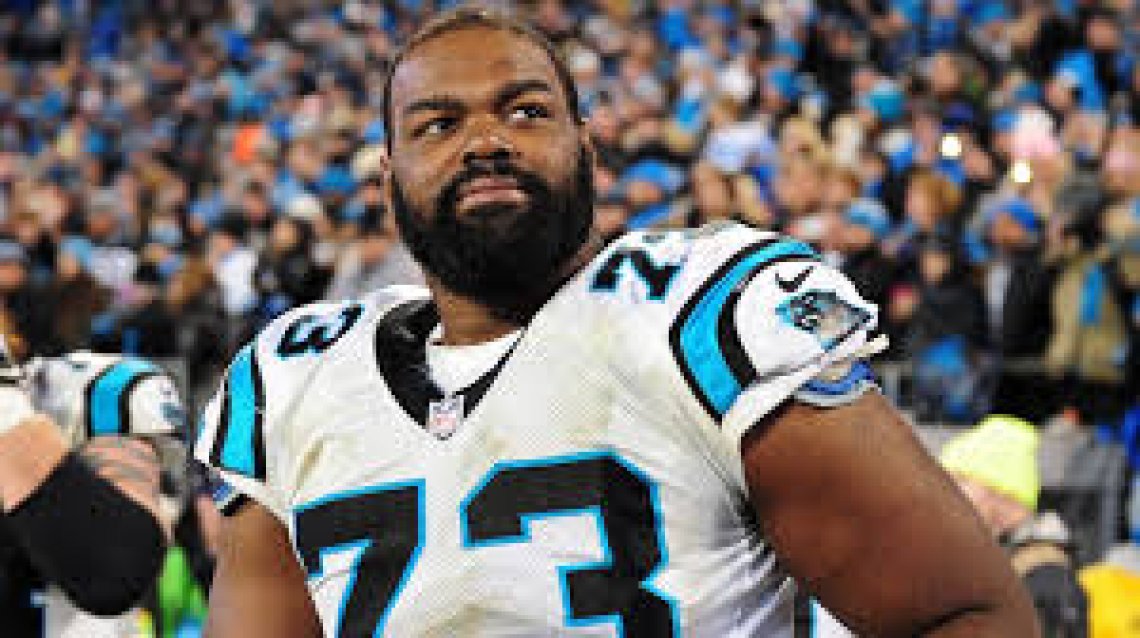 Meet Michael Oher (pronounced OAR), a 6-5, 309-pound All-America tackle from the University of Mississippi who is the subject of a best-selling book and movie, The Blind Side.

Among 13 siblings from the poorest part of Memphis, he never knew his father, whose murder he learned of months after the fact in high school. His mother, Denise Oher, was addicted to crack cocaine. The kids were scattered about.

Michael attended 11 schools in nine years. If not in a foster home, he lived with friends. He was homeless. His earliest childhood memories consist of taking care of himself as young as two years old. He was on his own from the beginning of his life. He doesn’t recall feeling tough just trying to get by, to survive.

A turning point came when Tony Henderson, who allowed Michael to crash on his sofa, brought him along when he took his son Steven to enroll at Briarcrest Christian School on the other side of town. Oher ultimately was admitted as a special-needs case. Another pivotal moment occurred during his first Thanksgiving break, when Sean and Leigh Anne Tuohy spotted Oher as they drove past a bus stop near the school. It was snowing. Oher, then 16, was dressed in a T-shirt and shorts. Sean, then a volunteer assistant basketball coach at the school who had met Oher at the gym, says Leigh Anne grabbed the wheel and forced him to make a U-turn. "She cried the second she met him, and it was over," Sean recalls fondly with a smile.

The Tuohy’s took Michael into their home. There were no family meetings or long discussions about the pros and cons. Just automatic acceptances into their home, letting him come and go as he pleased as though he belonged there.

"They've got big hearts," Oher says. "To take somebody from my neighborhood into your house? Nobody does that. I don't think I'd even do that. I'd help you out, but with a daughter and with all the violence and drugs where I come from ... they didn't have to do that. I owe a lot to them."

The Tuohy’s took him into their lives expecting to be a blessing to him, as fate would have it they were the ones who were blessed. About one year after taking him in, the Tuohy’s became Michael’s legal guardians. He was quiet but not shy. He was insightful and caring. He excelled in football but his greatest aspiration in life is to be a kind and loving husband and father. Michael wants to have many children and be able to tell them early and often that he loves him. A phrase he himself never heard until he was 18 years old when it came from Leigh Anne Tuohy.

This past draft Michael was a first round NFL draft pick for the Baltimore Ravens and was picked by Tom Lemming/ESPN as the nation's top offensive tackle and named to the Super Prep All-America team (ranked No. 24 among offensive linemen by that service), which also had him on its Dixie Team. He was rated the fifth-best offensive lineman in the country and eighth-best overall prospect in the South by Scout.com, as well picking up first-team All-American recognition.

This article is written by FosterClub Contributor Penny Bright. Penny is a working wife and Mother. She has lived in Alabama her entire life and has been involved in foster care and child advocacy for nearly 15 years and writes a blog about child welfare issues.

Read about Michael Oher's Memoir, I Beat the Odds, from Homelessness to the Blind Side and Beyond

As a senior, the first-team All-South selection by Fox Sports and the Orlando Sentinel was credited with 130 knockdown blocks, grading over 90% for blocking consistency, as he did not allow a quarterback sack. As a junior, he posted 83 knockdowns and graded 85%, helping lead Briarcrest to a 10-3 record and 2004 state championship.

In addition to earning two letters in football, Oher also lettered twice in both basketball and track. The basketball team went 27-6 in 2004, winning the district championship, as Oher averaged 22 points and 10 rebounds per game, earning All-State honors as well as making the Sun Coast All-Tourney team. In track, he was state runner-up in the discus. Michael’s story is remarkable and the perfect example of how important it is to reach to those around you. Often older children in foster are given up on. It is assumed that once they hit teen years there is no hope, their ways are set and nothing can be done to save them. Nothing could be further from the truth.

Sanda Bullock received an Oscar for Best Actress for her role in the Blind Side. Michael and the Tuohy family were in the audience to help her celebrate her big win.

Michael oher player is the only one player which is the reputation of the team from the softball playing by his talent. When he wants to get practices from the Prosportsae outlet he uses to get some kit material like shoes and shirts.

if there is a way foster club can get some contact info for Michael that would be awesome if I could get him to great falls and talk with some of the foster kids in the state of montana that would be neat.

i was really impacted by the blind side. that is why when i turn eighteen im starting a school, orphanage, and charity for kids like micheal. i think he was very brave in what he did.
P.S if micheal oher reads this caould uyou please contact me at [sorry, e-mail addresses aren't allowed according to our safety policy] about the foundations so i could get your opinion on them, Money is not a worry.
By Austin James Crispin age 14

I live in New England however I know what team i will be following this year in football and it will be the team Micheal is playing for. This man has come such a long ways in life and he is so lucky that he was blessed with people to help him.

I have seen the blind side and it was a very good movie. It makes u want to impact someone else's life and thats why im adopting my grandchildren whose lives are more important to me than my own.

I just watched the Blind Side yesterday night and I was SO impacted by how trusting the Tuhys were. I really give alot of props to Leanne for taking the initiative to stop the car and informally adopt him into her family.. You can tell that she geniunely cared and had her heart in the right place.. Its amazing how much of a difference a single person can make --she did it by putting fear away.. When people have fear and judge others or even rely on stereotypes as a source of information, they isolate themselves and push those who need help into the gutter. To me, this is the same exact reason why we have so many increasing social problems in this country. We can all learn a little something from this movie and I think - eliminating fear and pre-conceptions is one of them.

"I not only use all the brains that I have, but all that I can borrow."
Woodrow Wilson

Update on Micheal Oher- he started every game this year from the Ravens, got alot of Pro Bowl votes, and his team is now in the NFL Wild card game this Saturday @ 1:00 EST. To top it off, the Blind Side has been a huge commercial success. Nice job Micheal. Keep it up!