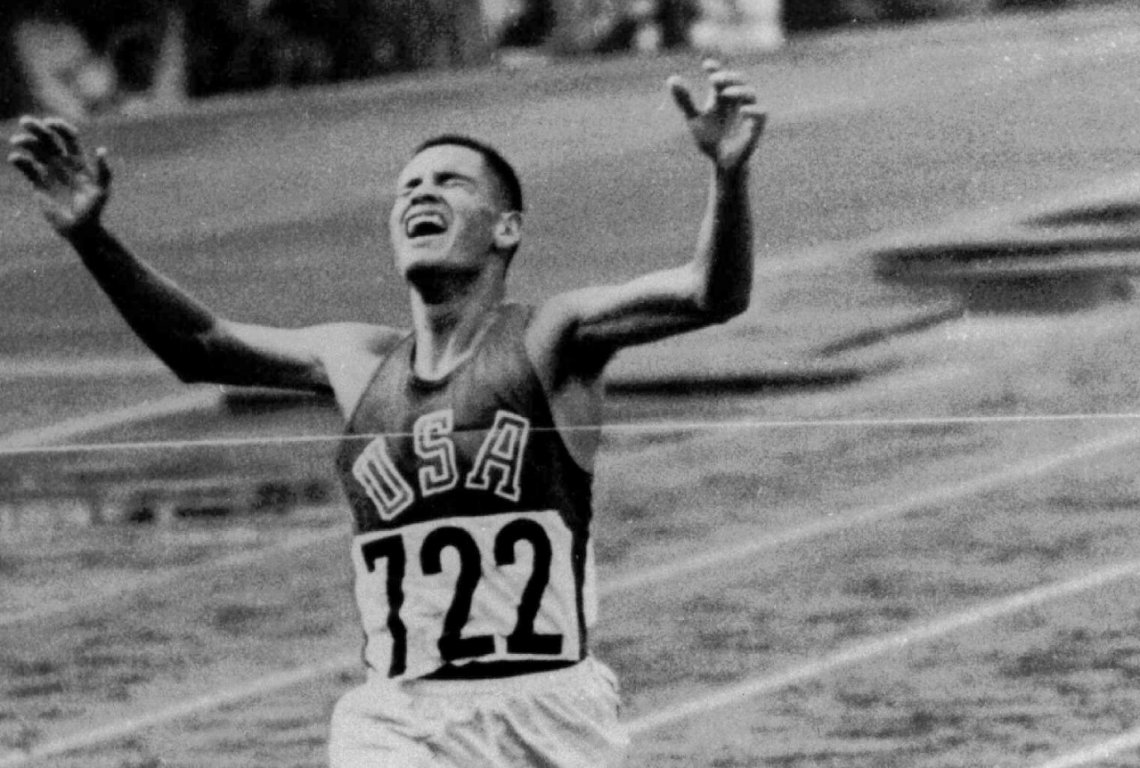 Many consider it the most sensational race ever run in Olympic History. It was the 10,000 meter race at the 1964 Olympics in Tokyo. No American had ever won the event. And no American was expected to win the event that year. Australia’s Ron Clark who was world famous in the event was favored to win, with second place expected to be taken by a Tunisian runner. Experts felt that any of the runners were capable of third place – there wasn’t a stand-out. The American Olympic Team sponsors had so little faith in Mills that he was initially refused a pair of running shoes because they only had enough shoes for those who were expected to win.

The race started out as predicted. The Australian and the Tunisian broke away from the pack at the beginning of the race and stayed in first and second position for nearly the whole race. For the USA, a Native American Marine named Billy Mills was back in the pack- so far that he looked completely out of contention. Although he was near last, Mills had not given up on himself and was performing as he always did during his years of practice for this event: “The sleek Native American…(was)…running as smoothly as the wind, without effort, in perfect control”.

Suddenly on the last stretch of the final lap, as if he had planned the race just as it was unfolding, Billy Mills stepped up his smooth pace, began to overtake the pack, recovered from a near stumble, closed in on the two leaders, then at the last possible minute, streaked pass them. Unbelievably Mills took the tape! America had won gold in one of the biggest upsets in Olympic History. Billy Mills crossed the finish line with a record setting time of 28 minutes 24.01 seconds.

That day in Tokyo, with Olympic Gold around his neck, Billy Mills became a national hero. In 92 years of Olympic History, no American had ever won the 10,000 meter run. But his spectacular win did not give a hint of the obstacles Mills had overcome in his life.

Billy Mills was born June 30, 1938. He was born on the reservation in Pine Ridge, South Dakota, desolate, poverty stricken and even today considered the poorest county in the United States. Billy’s mom was one quarter Sioux and died when Mills was seven years old. His dad, who was three quarters Sioux died when Billy was 12.

One of the big problems with this background was that being part Lakota Indian and part Caucasian made Billy “mixed blood” in the Indian community, which was very unacceptable. In the white community being Indian was unacceptable, also. Billy was an outsider and he had no mom or dad to help him deal with the rejection he experienced.

After the loss of both his parents, Mills was sent to a boarding school on the reservation as a child in care then later to another boarding school in Lawrence, Kansas. He took up running as a way to deal with not being accepted. “I would run five or 10 miles on weekends to get away from everybody else. And I cried. I’d be crying while I was running. A half-blood and an orphan – you couldn’t get much lonelier than that.

The summer after his high school freshman year, Billy worked on the reservation and lived out of his old car. One morning when he awoke, he recalled something his Dad told him: that the only thing between him and success was hard work. Since his Dad’s passing, Billy had been running as therapy for his pain and loneliness. Suddenly the running took on a new dimension.

Billy looked at running in a new light. He began to see that he had talent as a runner and with hard work, his achievements in track could become his ticket to acceptance. By his senior year, he earned a track scholarship to the University of Kansas. At the University, he built a successful athletic career excelling at track and even won some fame as a runner.

During this time Mills made his first attempt at his longtime dream: to be a member of the USA Olympic Team. When he didn’t make the 1960 squad, he was discouraged and he gradually began to let go of his dream to compete in track. He was giving up on his personal life, too. He felt that he was being judged unfairly because he was Native American. He didn’t feel accepted by students and faculty, even with his own classmates and coach. When he returned to the Reservation in the summer, he felt rejected again, accused of taking on the white man’s life. He felt he didn’t fit in anywhere.

Upon graduation from the University of Kansas, Billy married his long time sweetheart and took a commission in the United States Marine Corps. He says: “All my life I felt like I didn’t belong. The Marine Corps said ‘You belong’”. To this day, Mills encourages youth to consider the Marines. “I always mention the Marine corps in my speeches because it had such an influence on my life. The Marine Corps and sports were the only places I felt like I belonged, like I had a home…. The Marine Corps is a tremendous opportunity for anyone who is interested in a challenging career. It’s a great place to learn discipline, dedication, focus, mission accomplishment, honor, and gain career experience. Not to mention the pride one gets from being called a Marine.”

While in the Marines, Mills was not selected at first for the Marine Corps team training for the Olympics. Billy took his case to the commanding officer and after declaring his conviction that he felt he could win the 10,000 meter race, he was assigned to the All-Marine Track Team. Remembering his Dad’s words about hard work, Billy trained by running nearly 100 miles a week.

The rest is history. Billy went on to unbelievably conquer all previous Olympic records and for the first time in history, won the 10,000 meter run for the USA. Reports say that the crowd and his coach and wife were so stunned by his come from behind finish that, in the ensuing emotions, Billy couldn’t run the traditional victory lap.

billy is coming to my school in april

that's correct. Billy Mills is still alive. That's cool he's coming to your school. You'll have to leave a comment or two on the site here after the visit.

he hasnt died hes coming to
our school in april

You're right - The specifics of his foster care situation aren't very clear in this story. I'm guessing he ended up in care after being found living out of his car...

This article says that following the death of his parents, Billy Mills was sent to boarding schools....later, lived out of his car....how does this equate to being in foster care?

I was lucky to meet Billy Mills in High School, I ran cross country, and was way out in the lead. I sprained my ankle for the first of many times. I tell my friends and children, Billy Mills helped me walk back, but he also told me I should've kept running!

help i need to know how billy mills is influencing others???