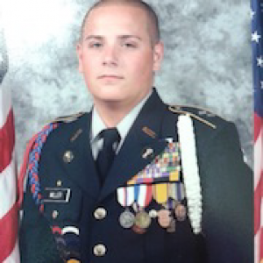 Trenton Miller spent 4 years in Florida's foster care system. As an older youth in the foster care system, Trenton spent most of his time in group homes. His mentor during his freshman year, got him involved in ROTC where Trenton flourished. He has logged more than 600 hours of community service as a Big Brother Mentor in the Big Brother Big Sister program, and a tutor and peer mentor at Eastern Florida State College. He has always tried to motivate other teens his age by setting examples through his good grades and assisting other students with their studies. He stresses the importance of being honest and straight-forward in his daily activities. Trenton was honored during the 2013 Florida Dependency Summit for his work as outgoing president of the statewide 2013 Florida Youth Leadership Academy, consisting of leadership foster youth selected by the Florida Department of Children and Families. Trenton also heads the Rockledge Leadership Academy, where he is in charge of over 150 students. He serves on the Brevard Family Partnership Youth Advisory Board, and consults the National Center for Innovation and Excellence on youth engagement practices. Enrolled in college, Trent is pursuing a dual career in Criminal Justice and Health and Fitness, and is starting an online business. He is enrolled in his senior year at Rockledge High School and in his first year at Eastern Florida State College. Trenton is committed to making a difference for others in his career and personal plans.