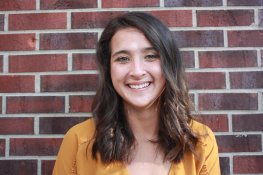 Nicole entered the foster care system at the age of thirteen and moved roughly thirteen times. While in care, she was told that she would never make it in life. Instead of taking these statements as a burden,  she used it as her motivation for success.

After aging out of the foster care system,  Nicole started adulthood homeless with fifty dollars in her pocket, and a very small network of those who supported her. Determined to change that, Nicole did research on which resources she had as a foster youth and how to receive them. Today, Nicole is a senior majoring in Social Work and has finally found her forever family.

Nicole is also a national advocate for the reformation of the foster care system. She has attended national conferences, summits,  workshops, and panels, in order to bring a change to the state of Kansas. She is very thankful for her independent living program manager, who has not only believed in her, but has given her many opportunities to represent her state.

In the future, Nicole desires to create a nonprofit organization that gives young adults from the ages of 16-21 resources on how to succeed in life: whether it is independent living, or continuing education. Overall, Nicole’s determination and desire to help others has made her a strong voice in advocacy for the state of Kansas.