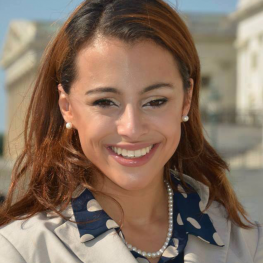 Lexie Gruber spent 8 years in Connecticut's foster care system. Lexie Gruber is a force to be reckoned with. During the seven and a half years that Lexie spent in Connecticut’s foster care system, she has made significant strides to improve the foster care system for those that are currently in it. As a current senior majoring in both political science and women studies and on track to graduate with high honors in the spring of 2015, Lexie is a role model that many young men and women in this country’s foster care system can follow. While maintaining a 3.7 grade point average and continuously being on the Dean’s List since starting at Quinnipiac University, Lexie has advocated tirelessly for foster youth. She has displayed her advocacy efforts through excelling as a Congressional Caucus for Foster Youth intern in Representative McDermott’s office during the summer of 2013, as well as becoming a published author of many opinion editorials that have appeared on the Department of Education’s website, in The Chronicle for Social Change, and in the Huffington Post. Upon graduation from college, Lexie aims to attend law school and specialize in child advocacy and serve as a watchdog over state child welfare agencies through litigation. Once becoming a successful lawyer, Lexie’s long-term goal is to become a Congresswoman and represent her home state of Connecticut.