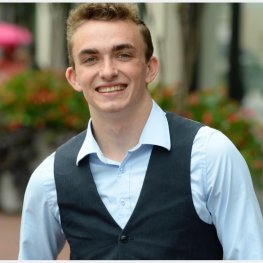 Joshua is someone who helps others without giving it a second thought because everyone deserves a chance.  He is very ambitious, strong willed and always ready to stand up for what he believes in his heart to be the right thing.

He is working towards his bachelor’s degree in Psychology and a concentration in Social Work at Marian University and maintains a successful job in direct sales.

Joshua has risen to leadership in the Indiana Youth Advisory Board and also has created his own path for advocacy, developing new relationships with leaders across the state.

Through the Advisory Board, he has established quarterly meetings with the Department of child services executive team, helped lead a holiday group project, worked with a team to create the Foster Parent Bill of Rights, In 2018 Joshua received a national award from the group Foster Club and from the U.S. Department of Health and Human Services, because of his commitment to the advocacy work for future foster kids.

Recognizing there was a broader group of leaders who needed to be aware of the needs of foster care community, he and a peer developed a networking system among DCS executives, agency leaders, and elected officials throughout the state.

Joshua does advocacy on a national level as an Jim Casey Young Fellow and the  Adoption U.S. Speakers Bureau.

Joshua’s life goal is to inspire many with his story while devoting most of his time to becoming a lobbyist to help as many foster kids as his possibly can.