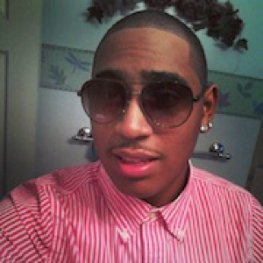 Elontai Sampson spent 8 years in Delaware's foster care system Eiontai is an ambitious young leader, committing over 400 hours of service in the past year and a half. During his sophomore year in high school, Eiontai began an anti-bullying group called the Gay-Straight Alliance. The group provides a safe meeting space for students who are lesbian, gay, bi-sexual, trans-gender, and straight to talk about various topics, as well as a support group for those who have been bullied and humiliated because of sexuality. Eiontai was elected as the President for the State of Delaware Gay-Straight Alliance Program with the United Way of Delaware. He is responsible for running GSA Programs across the State of Delaware. Eiontai is particularly committed to Anti-Bullying initiatives, and believes all students should be able to come to school and feel safe. Eiontai’s service has been recognized by others: he received the Youth Service Challenge Award from the Mayor of Wilmington, DE and the Governors Youth Service Award by the Governor of Delaware for outstanding community service hours. In 2013, Eiontai was sponsored by the Newark Rotary Club to attend a three-day Leadership Conference in Ocean City, MD. Eiontai excels in academics, also. He has received six academic honor roll awards, and was elected as a Student Ambassador for the Delaware Tech Upward Bound Math-Science Program. Eiontai plans to enter the entertainment industry, with his sights set on becoming a movie producer. Eiontai started T &amp; T Creative Productions with a partner, specializing in event productions, photography, videography, and talent representation. He has produced two fashion shows, including one sponsored by the United Way of Delaware, promoting his Gay- Straight Alliances