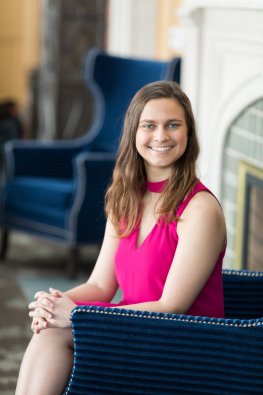 Catherine originally hails from Michigan where she attended the University of Michigan (Go Blue!) for her Bachelor in Science with a concentration in Evolutionary Anthropology as a Blavin Scholar. She went on to earn her MA in Jewish Studies at the Hebrew University in Jerusalem. Catherine currently works online and around the world for the Combat Antisemitism Movement (CAM) in the Partnerships and Diplomacy departments. Her work helps support Jewish life worldwide and protect Jewish as well as other minority communities from hatred by building coalitions and connecting with decision makers.

At the age of 16, Catherine entered the Michigan Child Welfare system when her mother became too sick to care for her. She stayed at Mandy's Place in Children's Village until the system could locate her father, but she remained a ward of the state and ward of the court until she turned 18. Catherine attributes her ability to persevere during her time in care to parents and friends in her Catholic high school community, who supported her physically and psychologically. Especially in the aftermath of the pandemic, Catherine strives to give a voice to the youth in care today and to build a better future for the Child Welfare system.