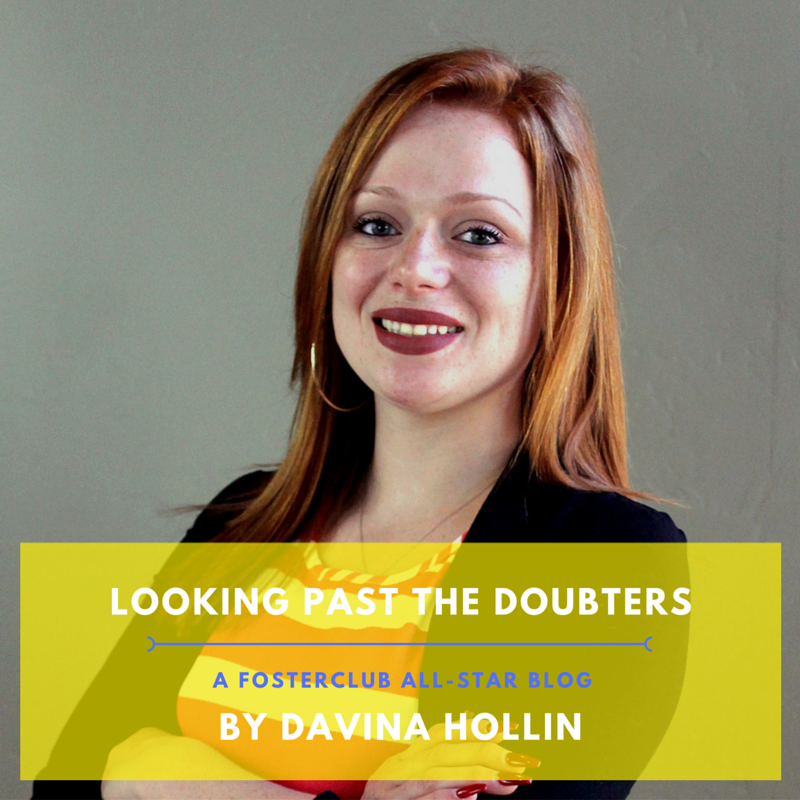 Failure... I acted out because I wanted someone to realize, that I was a young girl who felt hurt, lost and confused. My behaviors were never looked at in that way though. I was put down for being “bad”. The entire time, I just wanted to feel like someone cared enough to tell me that I would be great.

I eventually started to allow my “bad behavior” to become the justification for the bridges I burned. When I ran away from my foster home of eight years to live with my real mom, I knew in that moment I was facing the reality of my future destination. Running away was the best decision I could have made. It was years since I was in such a harmful situation, and instead of falling into the cycle my family was known for, I decided to stop drowning in self-pity, get off my high horse and bring forth the inner strength I knew I had. I enrolled myself into high school to finish my junior year of high school and got hired at the local day-care. Within my first week of living with my Mom I left and moved in with my brother because I couldn’t bear to see her self-destructive behaviors. Raising my niece, working a full-time job and being in school was my wake-up to call be better than my past. I lived with my brother for about seven months before I decided to turn myself back into care and graduate high school.

My senior year was a breeze but challenging because as I was applying to colleges. The constant doubt of failure never left my mind. My father's words seemed to play in my head over and over again. I soon became my own support and shut down all negative thoughts that clouded my vision to be successful. Although I seemed to do okay in college, I could never reach my full potential because I felt like a "failure". When I sit back and think of my life; shock, fear and relief are a few of the emotions that arise. Statistically speaking; I should be on drugs, pregnant, incarcerated, dead or homeless. I always thought I embraced negativity and used it as motivation and drive to excel in life. However; as I began my teenage years, I started to notice the role people's words played in my life.

While growing up, I had the mindset that I would be just like my mother. My biological father would do a great job of reiterating, that I am a failure and would always be one. After years of believing that I would fall into the cycle of drug abuse, like my mother, I started to travel down the wrong path. I had a pretty decent support system through-out my foster care experience, but believing that I would be like my mother indirectly caused me to be rebellious, angry and defiant. I never felt smart enough for school, so I eventually stop trying. I remember one of my high school teachers would always tell me that I wouldn’t make it in life and my attitude would be the cause of it. I was better than that and it broke my heart. I slacked off just to show him that I too could fail, and it was okay to fall short of your goals. He never knew how much of a role model he was to me and his death is the reason I graduated college and used all the negative circumstances of life as strength and guidance. Although, I’ve had my fair share of people who have shamed me, put me down and criticize my every move; I still rose above and beyond to prove I am great. I recently graduated with my Bachelors in Social Work, became a 2016 FosterClub All-Star, got a full-time position working with Foster Youth and got accepted into Texas A&M to obtain my Masters of Social Work. Negativity indirectly affected my life, but understanding the role it played allowed me to bring out my inner beast and be the best me there is. So, thank you to all those who told me I wouldn’t.