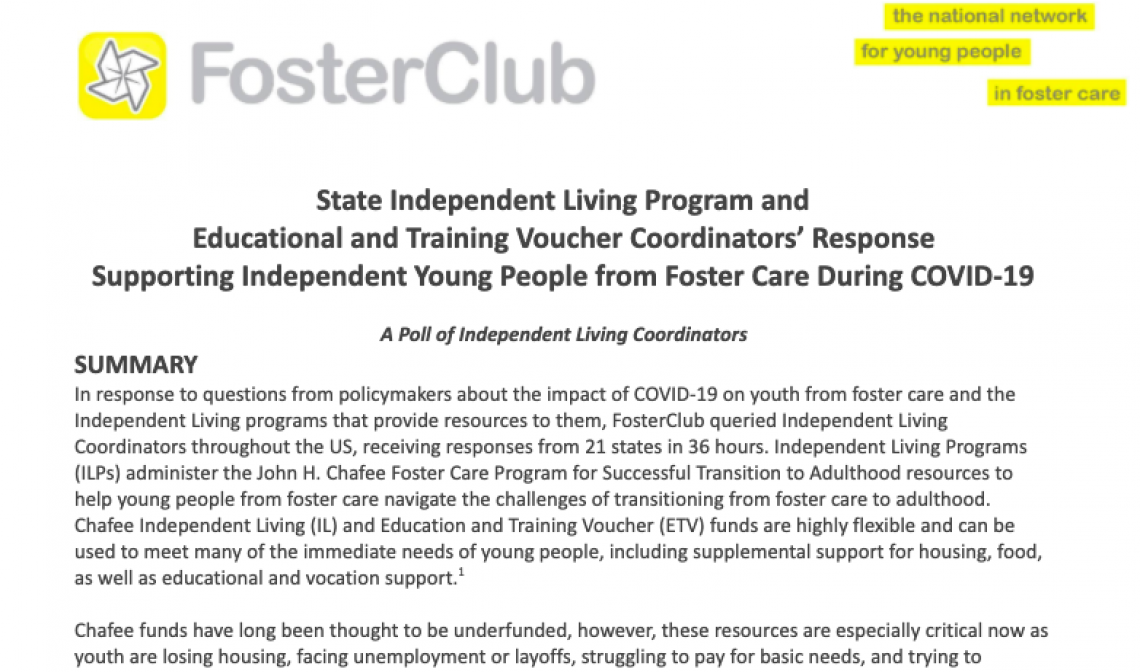 A Poll of Independent Living Coordinators

Chafee funds have long been thought to be underfunded, however, these resources are especially critical now as youth are losing housing, facing unemployment or layoffs, struggling to pay for basic needs, and trying to navigate this crisis without strong connections to parents or other adults who can provide them with guidance. Each year, approximately 186,000 youth between ages of 14 and 23 are estimated eligible for Chafee funds, however, estimates suggest just 60 percent receive assistance. Those that receive help are provided about $1,300 in services and financial assistance per youth. See FosterClub’s Chafee Independent Living Spending Analysis.

Increasing Demand
More than 77%, or 12 states, responded they have seen an increase in calls over the past 2 months from young people needing assistance.  Eleven states, or 58%, reported they did not have enough or were unsure if they had enough resources to meet increased demand. Of the states responding, 15 reported they expect they will need additional IL resources to help young people from foster care recover from the impact of COVID-19.

Nearly half the states said they have enough staff to meet demand, while more than half did not or were unsure if they did. Only 1 state reported they had had to lay off staff. Several ILPs reported redirecting resources to help young people. However, this is a short-term solution.

States reported that youth are requesting a variety of help and supports, with the top needs including technology, housing and money.  States also noted youth were struggling with mental health, and lacked connections to help sustain them through these difficult days. Related to the theme of lacking support, states also reported increased calls for help in figuring out how to apply for unemployment and stimulus checks.

How are state ILPs responding to the requests for help during the COVID-19 crisis?

States varied widely in their ability to respond to needs of young people from foster care.  Eight states (or 42% of respondents) reported that they have caps on the amount of emergency aid (cash) they can provide to young people, while 9 states replied they did not have caps, 2 were unsure. Reasons for caps on assistance ranged from lack of funding available to meet the needs of all eligible youth, federal policies related to use of Chafee for housing if ETV has been utilized, and unavailability of state or county funds to fill any gaps, once Chafee funds are expended. Three states reported they had a waiting list for IL services prior to COVID-19.

Despite these resource challenges, state coordinators reported employing multiple strategies and innovative tactics to try to reach and assist young people from foster care in need of help with the resources they could access. Several themes emerged in their responses.

Flexibility. Several states reported that because of the flexibility of their funding, they were better positioned to respond to the needs surfacing among youth from foster care. A New England state wrote:

Due to the nature of our funding (we seem to have more flexible statewide funds than other states do for independent living), we were well-equipped to respond in creative ways.  We have approved a lot of funding to help youth get through this time.  Our staff are meeting with youth virtually, finding new ways to connect, and thinking about how they can meet with you while maintaining social distancing as our state starts to open back up.  We have also lifted some requirements for staff to make the work easier.  For instance, we are accepting "virtual" signatures versus physical ones.

A western state reported they opted to unencumber their money so they could provide direct monetary support to youth. A Western state echoed this approach and said, “Providers are utilizing Chafee funds to buy food and help with bills.”

Eligibility. A Southern state reported they are “focusing on meeting basic needs” and are reaching out to those who no longer have an open case, but are still eligible for services. A quarter of the states (5 states) responded they had extended eligibility requirements to serve more young people due to COVID. Several states said they were looking into this or were expediting ongoing efforts to extend care. Overall, 17 states reported they extend foster care, 16 to age 21 (with two states allowing to 22 with certain restrictions) and one extending to 23.

Housing. Several ILPs reported that housing was a top concern.Some states noted challenges with existing federal policies that were making it difficult to fill housing needs.  A state from the upper midWest reported they are focusing on “helping youth residing in dorms have safe housing” (as transitions from school occur). A Western state echoed this approach and said, “Before we were hit by COVID-19 we were experiencing a housing crisis and now it has compounded.” Another state elevated the housing concerns:

“Accessing housing has become the biggest barrier for aged out youth during this time as housing authorities are closed; the youth have been laid off; the programs are operating on a waiting list, etc.”

In addition, one state noted the interconnection of housing with hea lth concerns because of COVID-19.

“The housing programs have experienced challenges in admitting youth due to COVID and necessary health precautions needing to be in place.”

Cash Assistance. Many states report providing financial assistance of all kinds to young people and are finding new ways to get financial resources to them.  One state reported they had increased allotments to meet housing and food needs, and another state said they were providing cash to assist with bills. A southern state reported they are “Providing gift cards for youth who have food shortages.  As resources become more scarce, one ILP reported they are seeking gift cards from local foundations to help meet the needs.

Guidance and Connections. ILP’s are providing emotional support and guidance to young people from care, as well as technical assistance in helping youth secure unemployment claims and stimulus checks. Some of the ILPs had shared information about accessing stimulus checks.

Many of the ILPs reported increasing their outreach to youth via texts and social media, and using technology such as zoom to host support and information sessions, and to facilitate peer to peer meetings.

Technology. Several states reported they have increased allotted funding to assist with technology. Another state noted there is inequity among youth who have access to technology. States are seeking to provide laptops to young people, and one state reported receiving Chromebook donations.

One state said, “It is most difficult when we have many youth placed in the same congregate care facility and being able to meet virtually due to the facility having limited technology capacities.”

States reported that they have appreciated recent federal webinars hosted by the Children’s Bureau and new guidance that has been issued. They asked for clear guidelines on whether policies related to Chafee and ETV would be relaxed due to the crisis. One state noted it would be helpful to have federal encouragement to spur extensions of foster care beyond the age of 21. One state noted that they believed the federal administration should not penalize states for NYTD standards that may not be met during this timeframe, and there be an enhanced ability to supplement ETV with general Chafee funds to meet the needs of youth.

Between May 12 and May 14, FosterClub conducted a national poll of state Independent Living Coordinators who support youth from foster care to assess the impact of the COVID-19 pandemic on youth employment, housing, food security, health and connections. Emails were sent directly to all ILPs listed on the national website. The poll was conducted by Celeste Bodner, FosterClub, with support from Marci McCoy-Roth. Thanks to Jennifer Pokempner, Juvenile Law Center, and Hope Cooper, LLC., for their edits. FosterClub received responses from 21 states:

1 The Independent Living Program (ILP) is a federally funded program designed to assist eligible youth in making successful transitions from foster care to independent living. Independent Living Coordinators in the States are responsible for assisting youth in foster care with accessing services geared toward achieving self-sufficiency prior to exiting foster care. The Education and Training Voucher (ETV) Program was originally created in 2001 with the passage of the Promoting Safe and Stable Families Amendments of 2001. The purpose of the ETV Program is to provide financial assistance for postsecondary training and education to youth who have aged out of foster care or who have left foster care after age 16 through kinship, guardianship, or adoption. Program definition taken from: https://www.childwelfare.gov/organizations/?CWIGFunctionsaction=rols:main.dspList&rolType=Custom&RS_ID=145&rList=RCL