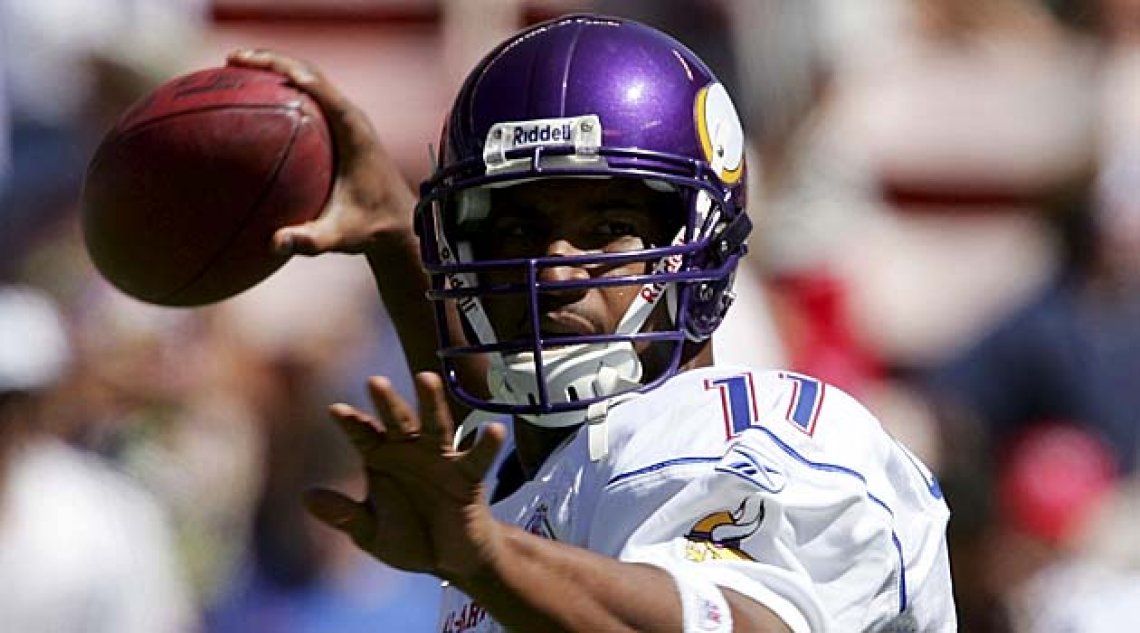 At 6 feet 4 and 265 pounds, Daunte Culpepper is the largest quarterback in NFL history. He runs a 4.6 second 40 yard dash and can jump 36 inches into the air and can throw the ball 80 yards.

Quarterback isn’t the usual position for a player Daunte’s size. When he was younger and gathering up footballs downfield after a practice, his youth-football coach saw how effortlessly he threw the balls back and tried him as quarterback at the next practice. His size, speed and talent along with his determination and perseverance has made Culpepper one of the all-time great football quarterbacks.

In high school, Daunte excelled in three sports, but unfortunately wasn’t paying much attention to his grades. “I felt I would do just enough to get by”. He says. It was not enough to get the necessary 2.0 average. The college powerhouses noticed his football talent and potential. But when they found out about his poor grade point average, they backed off right away. There are no free rides to college for students who can’t make good grades.

A football coach at the relatively obscure University of Central Florida saw Daunte’s predicament and helped him map out a plan to raise his grades his senior year. Culpepper re-took several classes and worked very hard (for the first time) in every class. That year he earned all A’s and B’s and made the honor roll. Suddenly all the big colleges wanted him again. But Culpepper was committed to the coach at Central Florida who had helped him. He ended up with B average grades in college and on the athletic director’s honor roll.

Drafted from University of Central Florida by the Minnesota Vikings, his coach Dennis Green said Culpepper has “incredible fortitude and guts, and he loves to play the game to win.” In 2003, Duante signed a ten year $102 million dollar with the team, the highest paying contract in team history and one of the highest in NFL history. Culpepper reflects on his astonishing financial rise. He remembers his life in Emma’s home, how his life was filled with love but little else, how when he was little, there was a Christmas with no presents.

Culpepper credits much of his success to his foster mother, Emma Culpepper, who raised him as the last of her 15 foster children. He was born in prison on January 28, 1977 to a teenage mother who was serving time for armed robbery. After her release, Daunte’s bio-mom reclaimed her young son, who was then about 5 years old. The boy pleaded and soon was permitted to return to his beloved foster mom. “She loved me that much to take me back to Emma’”

Daunte speaks about his foster mother: "She's a very, very special lady. Remarkable. Strong. Everything you'd want in a mother. In a parent. I just wish she could have been the difference in even more kids' lives. Her love was just always there. I can never repay her for what she's done for me. There's no dollar amount that I could ever give her that would amount to half of what she's done. She gave me those things that money can't buy. But I can try. I'm going to take care of her the best way I can."

As for his father, Daunte doesn't even know his name. One could easily forgive Culpepper for being wary of a father trying to re-enter his life now, as fame and riches arrive.

"[My biological mom] wants me to meet him, but it's really not a big important thing to me," he said. "I don't really care. I've thought about it sometimes. It never bothered me to the point where I'd sit down and cry about it. I was taught that things that are out of your control, don't worry about them."

"I didn't talk about (his biological mom's) life too much, because it makes him feel bad," Emma said. "And sometimes some of the children might tease Daunte about being a prisoner boy or prisoner baby, something like that."

Even to this day?

"No, not any more, because Daunte would knock them aside the head if they did," she said, laughing a deep, rich laugh. "They don't mess with him."

Daunte Culpepper is the celebrity spokesperson for the African American Adoption Agency in St Paul Minnesota. He is personally committed to finding permanent homes for foster kids of color and has worked to dispel pervasive misconceptions about adopting African American boys by speaking openly about his experience as a foster and an adopted child.

For his play during the 1997 season Daunte was voted the Florida Sports Hall-of-Fame Peoples Choice Award winner as the Male Amateur Athlete of the Year in the state of Florida.

CASA Volunteer- I am a huge Daunte Culpepper fan anyway and this story makes me more of one. I hope as a CASA volunteer I will make a difference in the lives of many children

one of his kids,
asia culpepper is in my school. no joke hawkes bluff go there\\

This is a great story.My husband and I have been fostering for about 6 years.It has had its up and downs. Most of all we are still here for the children because we truely feel n our heart that we are now operating n the devine will of God. This is a callin that has been hoovering around the both us for many years. We try to give them the most nurturing environment as possible. The impact that we make on the children has to only come from the most high. Kids if you are reading this know that there is someone out there that is sent by God to help you. If you are a fosterparent even when things get rough, dont leave them or give up. God will give u all u need to do the job.

cool that is so freckin tite

this was a graet article i love it and hes HAWTT ya diggg..

i loved this article! it was amzaign and touched my heart

i can throw the ball farther than you 100 yards

I've lived in Daunte' home town and watched him grow up as a football high school superstar. It's great to know what a positive family life and support system can do for lost children. These children in foster care are lost because of their parents problems not their own. If only all children in foster care could be motovated and incouraged to succeed also.