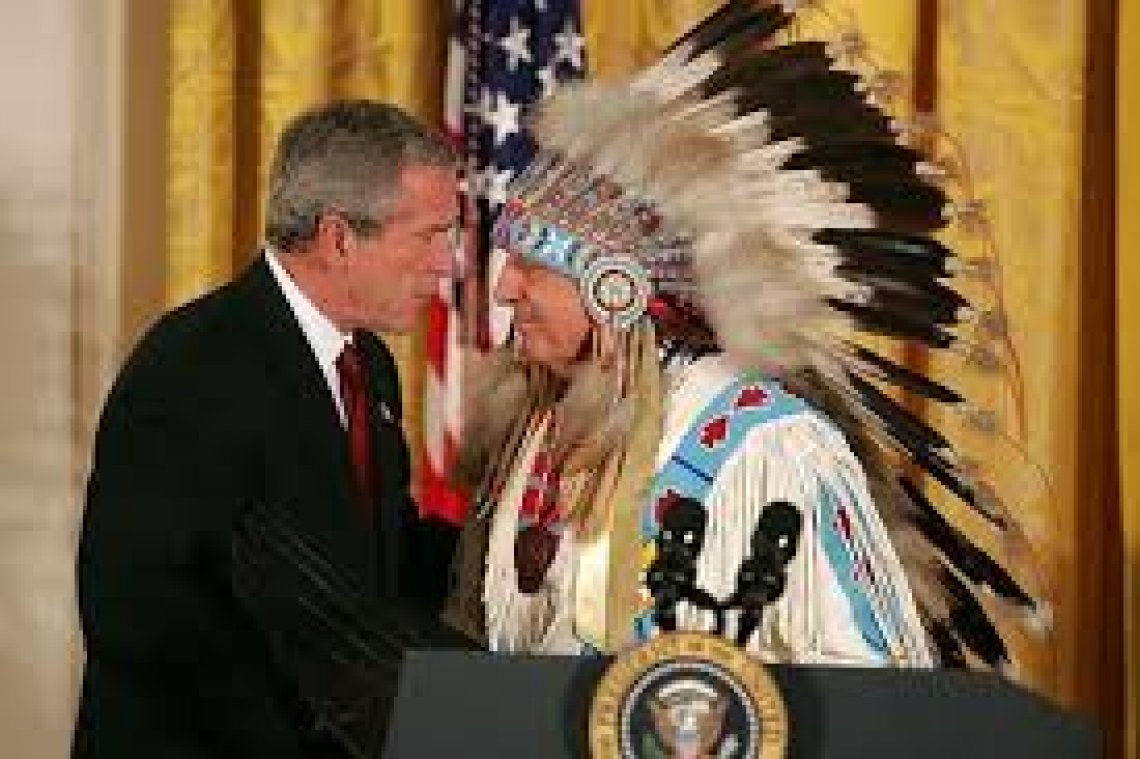 Elected by Colorado to the U.S. Senate in 1992, Ben Nighthorse Campbell was the first American Indian to serve in the Senate in more than 60 years. His own Senate website includes a brief biography: “born in Auburn, California on April 13, 1933, his Mother, Mary Vierra, was a Portuguese immigrant, and his father, Albert Campbell, was a Northern Cheyenne Indian.

”Ben’s family had a lot of problems when he was a child, problems that affected him a lot. His dad had grown up in a time when it was shameful to have an Indian (Cheyenne, Apache, Pueblo) background. In addition, his dad was addicted to alcohol and would leave home for weeks and months at a time. “He had it bad with the booze, like unfortunately a lot of Indian people do,” Campbell says.

Eventually his father deserted the family. “Most people have goals they want to achieve. I think when I was a kid I had goals I wanted to avoid. I didn’t want alcohol in my life.” Ben says.

Ben’s mother came to America from Portugal at age six and landed near Sacramento, California where there was a Portuguese community. At a young age she contracted tuberculosis and it was while she was later hospitalized that she met Ben’s father who was receiving treatment for alcoholism. They were married, but it was an unhappy marriage and a very sad childhood for Ben and his sister Alberta.

Because of their mother’s illness, Ben and his sister lived much of their young lives in orphanages. For the times they were able to live with their mother, they couldn’t be close because her tuberculosis was very contagious. Campbell says, “Little kids always hug their mother. I could never do that.” He says he has a memory of living for a short time in the hospital where his mother was being treated. But he and his sister were separated from her by a glass window.

In his teenage years, Ben struggled in school, clashed with the law, and when his mom was readmitted to the hospital, quit school and joined the Air Force. He served in Korea and credits the military with giving him predictability, structure, and a regular paycheck, all new experiences in his life.

With his tour with the U.S. Air Force finished, Ben had no career direction. To earn money for living expenses and to get time to figure out his life, he took work in the fruit and vegetable fields of California, picking tomatoes for fifteen cents a box.

While he was picking produce, Ben got to know one of the truck drivers who transported tomatoes from the field to the grocers. Gradually they got to know each other better and the truck driver became concerned about his new friend’s future. He believed in Ben and wanted to help him. He taught Ben how to drive a truck and let him practice maneuvering his truck in the field, not getting upset when he backed the truck through a fence. Later he helped Ben get his first driving job.

With his mentor’s guidance and support, Ben stopped working in the fields. He drove truck and was able to support himself and finance his college education. He earned his degree in physical education and fine arts from San Jose State University.

Around this time, Ben got interested in the sport of judo. Learning and perfecting the sport required hours and hours of practice and Ben pursued it with determination. In college he was the youngest person in the United States to hold the fourth degree black belt. He traveled to Japan to further study with judo masters and participated in the 1964 Olympic Games as a member of the U.S. Olympic Team. He went on to teach judo and considers the sport an excellent way to develop self- discipline, self control, and self respect. He credits judo with helping him to pull his life together, allowing him as a young man to burn off energy and aggression without breaking the law.

When Ben Nighthorse moved to Tokyo in 1960 to Train for the 1964 Olympic games, his interest in metal working grew when he studied under a Samurai sword maker. He began to develop techniques of laminating metals and jewelry designs. The skills he developed can be seen today in his world class work. His has received more than 200 first-place and best-of-show awards for his jewelry designs.

Ben Nighthorse Campbell didn’t plan on getting into politics. Attending a local political gathering where nominees for state offices would be selected, he decided on the spot to oppose an attorney running for the Colorado State Legislature. He won (the year was 1987) and went on to be elected to the U.S. Senate in 1992 and was re-elected in 1998.“I believe everybody has his own way of making change”, he says.

Being in the sometimes formal and stuffy senate did not change the senator fromn Colorado. Back in his hometown of Igancio, he regularly roared on his bike, bedecked in red bandanna, ponytail flying. He says: “Some people criticize me for not being senatorial because I drive trucks and ride motorcycles (another one of his passions).” In Washington D.C., “Sometimes when I ride up on my motorcycle (a Harley) and park it next to all the big town cars, they (colleagues in the U.S. Senate) look at me a little strangely. But then one of ‘em will come up to me and whisper “Gee, I’d like to get one of those, too.’”

In 2004, at the age of 70 and after 22 years in state and national politics, Ben announced that he would not be running for a third term in the U.S. Senate. He says he is resigning because of health problems and desire to spend time with his family. He said, “To my family, I love you as only a man who grew up without a family can.”

Community means a lot to the Senator. He says, “It starts with family- which I didn’t have when I was young. But that doesn’t mean one can’t go out and find it in other circles.” He believes that a person can create community by simple participation. As the saying goes, ninety percent of it is showing up.

Humankind has not woven the web of life. We are but one thread in it. Whatever we do to the web, we do to ourselves. All things are bound together. Chief Seattle (1790-1866) Chief of Duwamish, Squamish and other Puget Sound Tribes

Senator Campbell is a renowned jewelry designer, athlete, trainer of quarter horses. He has been married to Linda for more than 35 years and is the father of two grown children and grandfather to three little ones. He and his family enjoy many activities together, including (naturally) riding motorcycles.

This is deep right here