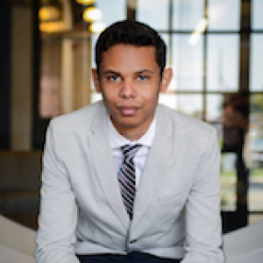 Matthew Madlock spent 7 years in Tennessee's foster care system. Matthew entered the foster care system at birth when he was left on the streets of San Diego, California. He was eventually adopted into a family that moved several times and settled down in Tennessee, where he currently resides and attends college with a business major. When he was 13 years old, his adoptive parents divorced, he was faced with a dissolved adoption and ended up back in care, where he then lived in two different foster homes and two group homes until 19, when he was able to live in his college dorm. Matthew attends the University of Tennessee, Knoxville, with a major in business, and has a business set up on campus which he has operated for three years. He has gained an internship with the executive director of Education Technology for Metro Nashville Public Schools (MNPS), where he was granted the opportunity to speak to all MNPS executive principals and other officials about issues regarding education, 250 people in all. He created a survey for all high school youth in his MNPS school district about their usage of 21st century technology and graduated as salutatorian for his class of 2013. He won the $20,000 Horatio National Scholarship, and was selected by the Horatio Alger Association as one of five students to fly to Washington D.C. for a televised interview and selected to participate in a leadership retreat on a private island owned by Richard Branson. He was also interviewed on Fox 17 and NPR, won first and second place in Distributive Education Clubs of America (DECA) District Championships in marketing management and works with local entrepreneurs on their own start up companies. He was sent to discuss improvement in the Department of Children Services in Tennessee with legislators and met with the Tennessee’s governor, Bill Haslam, at his Systems Alignment Symposium. He then met with Mr. Bill Clinton in June, 2013, when he was invited to talk on the former president’s Development Council in Chicago. Despite many hardships he faced at a young age, he has become a focused and determined young leader, never compromising his performance in high school or college, and setting the pace for business and technology as it will be used by his peers as they enter the workforce. His unsurpassed networking capabilities and ability to converse with anyone, leads the way to developing supporting relationships as he strives to meet his goals. He is described as honest, outgoing, humble and gracious, striving to earn for himself the things he needs and never wanting to take advantage of others.