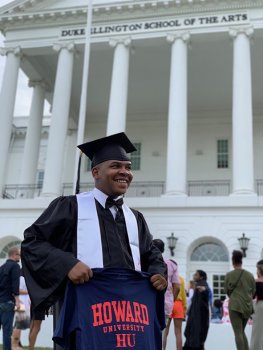 Jamarri currently attends Howard University majoring in Computer Science. However, when he graduates he will be nose diving into foster care advocacy, and hopefully get a tech job around it as well. He is currently pursuing his bachelor’s degree. Basketball is Jamarri’s favorite sport, he’s a devout Philadelhpia 76ers fan. Basketball is also one of his favorite hobbies, as well as making music and playing video games. In his free time, Jamarri likes to watch old cartoons for nostalgia, and practice guitar.

Jamarri volunteered on NCCF panels to act as a liaison between foster youth and foster parents. Jamarri has been in foster care since he was 9 years old and was recently adopted at 20 (11 years). He’s been in 7 placements including a failed kinship and group home. Jamarri has 4 siblings he loves dearly and talks to them as much as he can.

His career goals are to use his voice wherever he can to help weed out those gray areas in foster care and bring them to light so youth in care can be better served.