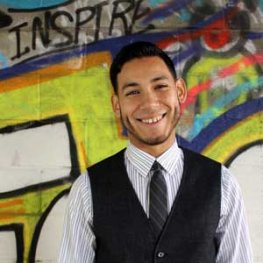 Eric Diaz spent 7 years in Massachusetts' foster care system. Eric has spent 6 years in Massachusetts’ foster care system beginning at 14 and is still in extended care. He has experienced multiple placements including emergency placements, foster homes, kinship, and congregate care. He was fortunate to be placed with a local pastor for his community where he resided until he left for college. Despite not being involved with a formal youth advisory board Eric has been a resilient agent of change in his school and community. During high school he served as a mentor and tutor to younger youth, not through a formal program but on his own accord. Later, he became involved with a local Christian leadership group and was afforded the opportunity to serve in the Dominican Republic helping teach English to local teens. He also volunteers with the local Boys &amp; Girls club volleyball team, eventually leading him to become an assistant coach for the team. Eric presently attends Clark University where he is working towards his bachelor’s degree with aspirations to continue on to law school.